From the Eternal Flame to the Sweet Corner – the busiest and most elite Sarajevo promenade is Ferhadija Street.

Have you ever been wondering how this street was created and after what it was named?

It is believed that it represents the busiest promenade due the fact that you can find everything you need on it, including: shops, restaurants, street vendors, as well as the City Market Markale, Faculty of Economics, and the headquarters of the Football Association of B&H.

Ferhadija Street was created in the 16th century, and it was named by street formed around the mosque of Bosnian Sandzakbeg, Ferhad-beg Vuković Desisalić. 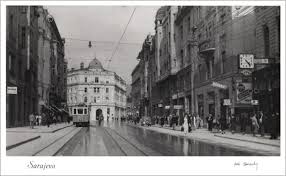 In 1928, the name of the street was changed in the Crown Prince Peter, and the street carried that name until 1941. Later on, the street carried the name of well-known national hero Vasa Miskin, during the times of former Yugoslavia. On the 6th of December 1944, he was awarded with the Order of National Liberation by the Presidency of AVNOJ, and he was proclaimed as the national hero only few days after his death: on the 26th of July, 1945.

This street became a world famous on the saddest way possible: by the massacre that took place while people were waiting in line for bread on the 27th of May, 1992. After the war in 1993, it returned to her old name – Ferhadija.

As you walk down the Ferhadija you can enjoy the Austro-Hungarian construction on both sides, since the street is surrounded by buildings created mostly during this period of time. On the right side at Sarači, you can enjoy oriental atmosphere, and only dozen meters lower, you have a feeling like you are in completely different time.

Gazi Husrev-beg bezistan will take you into the world of the Orient with its offer, as well as its construction.

The thing that makes Ferhadija even more popular is the fact that the first electric tram in Europe headed from here, and since then, although pedestrian street, Ferhadija is one of the busiest parts of Sarajevo.