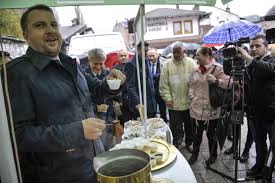 Mayor of Sarajevo Abdulah Skaka and his deputies Milan Trivic and Ivica Saric celebrated the 555th anniversary of the establishment of the city of Sarajevo. On the square on Bascarsija, citizens of Sarajevo and guests celebrated by drinking Bosnian coffee and eating traditional pastries.

Event named “Coffee with the Mayor” took place on the occasion of the April 6th , Day of Sarajevo.

Skaka said to the media that the message of gathering is that the new city administration came out of the frame of standard cliches of organizing events for the celebration of the city of Sarajevo.

“In this symbolic way we invited all citizens to join us and to openly discuss all issues. So, by changing standards, we are entering into direct communication with the citizens,” said Skaka.

From the City Administration it was stated that they are particularly proud that the city of Sarajevo retained its multiethnic sense and that it will in the future try to keep the peculiarities of which Sarajevo Is known, but will follow the modern world trends.