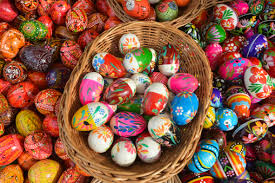 Faithful Catholics, Protestants and Anglicans from all around the world are celebrating Easter on Sunday, April 12th.

It is the biggest holiday of Christianity, the day of the resurrection of Jesus Christ. According to Christian belief, Jesus Christ was sentenced on Thursday, crucified on Friday, and resurrected on Sunday. The symbol of Easter is the egg, which represents birth.

According to Christian belief, Jesus Christ defeated death with his resurrection and give eternal life to all the people on the Earth.

The day on which the feast of the resurrection is celebrated is counted 40 days from the Ash Wednesday, which is called Lent.

The celebration of Easter was preceded by 40-day fast, and the day itself is celebrated in churches with prayer and Holy Mass, whose culmination is communion or union with God.

Easter is celebrated in the family with traditional food and tradition of cracking open previously prepared colored eggs.