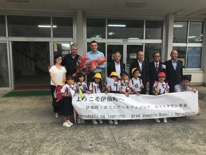 Mr. Besim Gljiva, President of the Association of Breeders of Bulls, together with H.E. Dr. Sinisa Berjan, BiH Ambassador to Japan, attended the signing ceremony held in Isen, a town of the Southern island of Japan.

The guests from BiH was cordially welcomed by the town Mayor Mr. Akira Okubo and a number of local people who will support and cheer BiH athletes during the Olympic and Paralympic Games in Tokyo next summer.

The town of Isen, which is popular as longevity and high birth rate in Japan, became a Host Town for BiH due to common tradition of bullfighting. The town will continue to develop relations with BiH through fostering mutual understanding and friendship.

On the occasion of the Olympic / Paralympic Games Tokyo 2020, athletes, executives and staff from Bosnia and Herzegovina will visit Japan. Taking this opportunity, the town of Isen and three related organisations from Bosnia and Herzegovina will promote personal and cultural exchange and shares information on traditional bullfight, which represents mutual interest, as well.

Those who will participate in the Olympic / Paralympic Games Tokyo 2020 will visit the town of Isen after the competitions, in order to develop friendship with local residents.  As for the cost allocation, the town of Isen will be charged for air tickets between Tokyo and Tokunoshima, accommodations and any other expenses.

In terms of any other details on the plan of the visit, it will be realized through the mutual agreements.