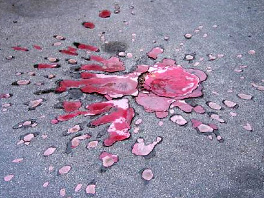 “This rose is located in front of the church at Marijin Dvor and clearly indicates that the assailants who were firing from the hills around Sarajevo did not hesitate to destroy religious buildings, hospitals, nurseries and maternity wards”, said the Minister for Veterans’ Affairs of the Sarajevo Canton Muharem Fišo during today’s visit to one of the five newly refurbished “Roses”, and added that this rose is not just a flower or color, it is an imprint of the blood of the innocent citizens.

“We will never let people forget a symbol of defense, heroism and suffering”, added the Minister Fišo.

“In the first phase of reconstruction, the continuation of the work on the reconstruction of the remaining eight roses is planned. We had some problems, because we had to wait for the Institute for the Quality to certificate that the colors and materials are high-quality, since they have to be resistant to various climate conditions. Our intention is to renew all 105 ‘Roses’ that are drawn in the urban plan”, said the Minister Fišo and announced the giving of a recommendation to the Construction Institute of the Sarajevo Canton to take care of roses when restoring the walkways and streets.

According to his words, the Ministry of Veterans’ Affairs of Sarajevo Canton has allocated 6.000 BAM for the restoration of 13 roses so far, but will strive to provide funds to rebuild at least another 50 ‘Roses’ through the budget rebalance.