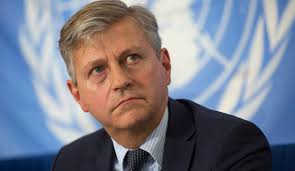 UN Undersecretary-General for Peacekeeping Operations Jean-Pierre Lacroix on Monday called for restraint from Belgrade and Pristina.

“The recent developments in Kosovo have further deteriorated relations between Belgrade and Pristina, which have been strained for some time with no progress on the EU-facilitated dialogue. We are concerned at the risk of tensions on the ground, particularly in northern Kosovo,” Lacroix told the Security Council.

“It is therefore crucial that Belgrade and Pristina avoid any steps that could further worsen the situation, but rather find ways to re-engage in the dialogue aimed at the normalization of their mutual relations.”

The latest tension culminates on the adoption on Friday of three laws by Kosovo’s parliament on the transformation of the Kosovo Security Force.

Belgrade condemned the adoption of the laws as “an act of political aggression against Serbia and a violation of Security Council Resolution 1244,” said Lacroix.

Kosovo, which is dominated by ethnic Albanians, unilaterally declared independence from Serbia in 2008, which has not been recognized by Belgrade.

On Nov. 21, following Kosovo’s failed bid to join Interpol, the government of Kosovo announced an increase of the tariff on goods imported from Serbia and Bosnia-Herzegovina from 10 to 100 percent.

In response, the mayors of the four Kosovo Serb-majority municipalities of northern Kosovo announced their resignations and the decision of the respective municipal assemblies to cease all official communication with the Pristina authorities. The main Kosovo Serb political party, the Serbian List, has organized daily protests centered in North Mitrovica that have at times involved up to 5,000 people, said Lacroix, Xinhua reports.