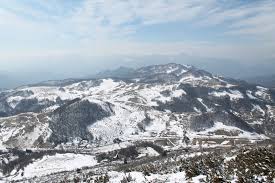 It is January, the peaks of Bosnian Mountains are still well under snow.

Over the weekend, a group of hikers visited Lisin (1742 m), the highest peak of the mountain Bitovnja, which is located 10 km from Konjic and southwest of Sarajevo, where they took some beautiful photos.

From the top of Lisin, the view stretches to the mountain peaks of central Bosnia. The mountain is rich in water sources.

A facility of BH Telecom is situated on top of Lisin, where workers are residing 24 hours a day, so the hikers can shelter in case of strong storms.

Bitovnja is a mountain in the municipality of Kresevo, Bosnia and Herzegovina. It has an altitude of 1,700 metres (5,600 ft).