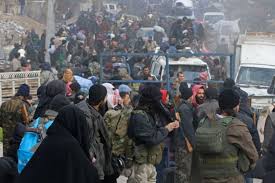 ALEPPO, Syria, Dec. 21 (Xinhua) — A Syrian military source told Xinhua Wednesday that the rebel evacuation from eastern Aleppo city in northern Syria is ongoing, as an official at the International Committee of the Red Cross said 30,000 civilians have been evacuated from that part of the city.

The rebel evacuation is ongoing till the last rebel leaves eastern Aleppo, said the military source, adding that the army will declare the city free of rebels when the last rebel leaves.
The evacuation is part of a deal concluded recently between Russia and Turkey. It included the evacuation of civilians from the Shiite towns of Kafraya and Foa, which are besieged by the rebels in the northwestern province of Idlib.
It came as the Syrian army was on a crushing offensive against the rebel-held part of Aleppo, which resulted in wresting back control over 99 percent of eastern Aleppo.
The evacuation operation has been ongoing since last Thursday, and the rebels were leaving in buses and cars through the Ramouseh crossing south of Aleppo toward rebel-held areas in the southwestern countryside of Aleppo.