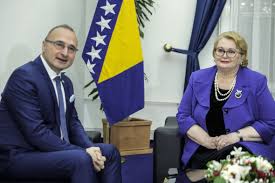 Minister Radman congratulated Minister Turkovic on her appointment as Minister of Foreign Affairs of BiH and wished her and the new convocation of the Council of Ministers a successful work.

He emphasized that Croatia will be an active advocate of the European path of Bosnia- Herzegovina in accordance with meeting the required criteria.

Minister Turkovic thanked and emphasized that she was very honored that her first meeting was held precisely with a colleague minister from one of the neighboring countries.

She expressed her gratitude for the support that the Republic of Croatia has shown in the EU integration process of our country and used the opportunity to wish Croatia a successful Presidency of the Council of the European Union, which it assumes from 1 January 2020.

The interlocutors agreed that relations between the two countries should be developed in the spirit of good neighborly relations and respect for mutual interests.