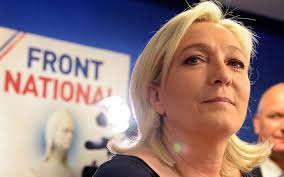 PARIS, April 23 (Xinhua) — Centrist candidate and former minister of economy Emmanuel Macron and far-right candidate Marine Le Pen on Sunday came out on top in the first round of the French presidential election, according to projections based on initial vote counts by polling agencies.

An updated estimation by research firm Elabe for local broadcaster BFMTV indicates that Macron leads with 24 percent of votes, and Le Pen 21.8 percent.
A total of 11 candidates participated in this year’s race towards French presidency, and the two leading candidates are set to face off in the runoff on May 7.

At a gathering after the vote, Le Pen hailed the results as “historic,” and expressed “profound gratitude” to her supporters.
She also called on voters to join her to create “national unity,” promising to bring “great alternative” to the country.

French president Francois Hollande congratulated Macron on the phone for advancing into the second round, according to French media reports.
Right-wing conservative candidate and former prime minister Francois Fillon conceded defeat Sunday night, and vowed to vote for Macron in the runoff on May 7.

“The defeat is mine. Do not scatter, stay united,” Fillon told his supporters in a gathering after the vote.
According to the updated estimation, Fillon ends up in the third place with 19.9 percent of votes, while far-leftist Jean-Luc Melenchon ranks fourth with 19.3 percent.