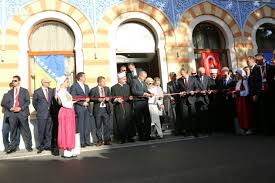 The renovated Isa-Bey’s hamam as well as the restored part of the Emperor Sultan Fatih’s mosque was opened yesterday in Sarajevo in a solemn ceremony.

The renovation was financed by the Waqf Directorate of the Republic of Turkey, which allocated near 2.600.000 BAM for this project.

The founder of Sarajevo, Isa Bey Isakovic built a series of very beautiful and important public buildings during the thirty years of his reign of Sarajevo, such as the first mosque – Emperor’s mosque, the first public city bath, the first bridge over Miljacka river, and numerous other buildings.
The hamam was burned in 1880, and was rebuilt based on the project  of Josip Vancas. It was built in the oriental style; the bath had a steam or so-called Turkish bath and private spa pools.

Isa-Bey’s hamam is located on the area of 817 square meters, and during the renovation, the original facade projected by Josip Vancas was kept. The hamam was transformed into a hotel with 19 rooms and two apartments, and all the furniture is in the old-ottoman style, of the highest quality.

Numerous guests and foreign officials attended yesterday’s ceremonial opening, among them were member of the BiH Presidency, Bakir Izetbegovic, and the president of the Republic of Turkey, Recep Tayyip Erdoğan who cut the ribbon.