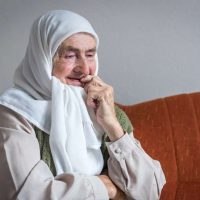 a is a specific Bosniak script introduced with the entrance of the Kingdom of Bosnia into the Ottoman-Islamic cultural and civilizational circle. The Bosniaks of the time, whose lifestyle was Islam and who used Oriental languages and Arab script to communicate with the entire Ottoman empire, created the new script Arebica, and adjusted it to the phonetic-phonological system of the Bosnian language.

This script was used to create the rich Aljamiado literature. It is assumed that the oldest Bosnian text written in Arebica is the Početnica, created during the time of the Sultan Mehmed Fatih. Bosnian authors from the beginning of the 17th century used Arebica to write their works in Bosnian language.

However, with the arrival of the Austro-Hungarian Monarchy, Latin script substitutes Arebica entirely. Arebica remained in use in religious service of Bosniaks until the beginning of the Second World War, when the last book was printed in Arebica (Fikhul Ibadet by Muhamed Seid Serdarević). After that, Arebica was almost entirely forgotten.

Between Olovo and Zavidovići, in the village Čuništa, lives Nura Ferhatović. She is almost 80 years old and Arebica is the only script she uses. Nura was born in 1937 in the village Glavnično and she started learning Arebica in 1946 with the imam Ahmet Muminović.

“I was nine years old when I started going to religious school. I wouldn’t like to brag but that imam noticed me as soon as he came, told me how I behave well and placed me in the first row. We studied with him for four years maybe, and then he got ill and died,” Nura recalls and says that she has three friends who went to religious school with her. However, although they used to know Arebica, they forgot it because they did not read it and practice it regularly.

Nura says that during her lifetime she mostly used Arebica and that she learned Latin and Cyrillic script from newspaper. Once she went to the store and made a grocery list.

“I wrote on a piece of paper all the things that I should buy, so that I don’t forget anything. When I enter the store, I started reading to the store employee what I need and he first looked at the paper and then at me, and then at the paper and so on. I saw he was surprised, and then I explained him that the list was written in Arebica or, as our imam used to tell us, on Bosniak Cyrillic. He was stunned, nothing was clear to him,” said Nura.

Nura Ferhatović claims that all those who leave Bosnia can’t wait to come again and breathe the Bosnian air and drink the Bosnian water.

“You can travel around the world, but you cannot find this water anywhere in the world. I have a son in America and every year he wants me to come and spend some time with him. And I always tell them how could I? If I go there, it will be difficult for me to leave and go home, and I cannot live anywhere but in Bosnia,” Nura says.