In 1997, prominent comparative political scientists’, Adam Przeworski and Fernando Limongi, crunched some numbers and found a very interesting correlation between GDP per capita PPP (Purchasing Power Parity)[1] and the future prospects for the survival of Democracy within Democratic nations;

“In turn, per capita income [GDP per capita PPP], our measure of the level of development, has a strong impact on the survival of democracies. The simple fact is that during the period under our scrutiny or ever before, no democracy ever fell, regardless of everything else, in a country with a per capita income higher than that of Argentina in 1975: $6,055. Thirty-two democracies spent 736 years with incomes above $6,055 [based on 1985 GDP per capita PPP] and not one collapsed, while thirty-nine out of sixty-nine democracies did fall in countries that were poorer. (Przeworski and Limongi 1997, 165)[2]

Their measure was based on the 1985 PPP in US Dollars.  According to Przeworski and Limongi, “The references to levels of development and growth rates are expressed in constant U.S. dollars computed at purchasing power parities and expressed in 1985 prices. (Thus all $ numbers refer to 1985 PPP USD) (Przeworski and Limongi 1997, 158).”  If one adjusts the 1985 GDP per capita PPP amounts for inflation today, the corresponding dollar amount today would be around $13,400.87 USD[3].  Let’s look at BiH’s GDP per capita PPP from 2005 through 2014:

Bosnia is one of the poorest nations in Europe.  According to some reports, in 2013 it the poorest.

Bosnia and Herzegovina has the lowest Gross Domestic Product, GDP, per capita and the lowest Actual Individual Consumption, AIC, of 37 European countries, according to a report by the EU statistics agency Eurostat.[5]

Here is an image showing how long democracies last in relation to GDP per capita based on the metrics calculated by Przeworski and Limongi; 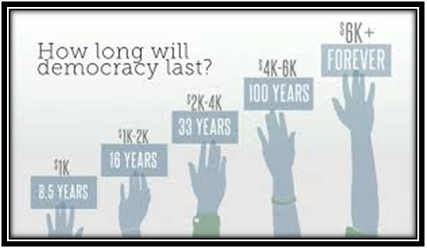 Calculating the value of $9225 USD in 2014 back to its value in 1985, would place Bosnia’s current GDP per capita PPP in 1985 at $4,168.18 USD, thus placing Bosnia’s ‘democratic life expectancy’ at just over the 100 year threshold, but still ominously close to the 33 year category.  This is something very important to consider for Bosnians, especially since it has been a democracy for almost 20 years now.  If Bosnia does not sustain continued economic growth; it is only a matter of time before an imminent collapse if one accepts this metric.  I would go on to argue that based on the general instability in this region anyways, the risks for democratic collapse are even greater.  Perhaps politicians should spend more time focusing on how to get Bosnia to the $13,400 adjusted per capita PPP if they really want to ensure long-term political stability.