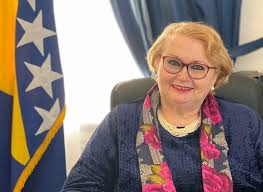 The Deputy Chairman of the Council of Ministers and Minister of Foreign Affairs of Bosnia and Herzegovina, Bisera Turkovic, will be on a five-day official visit to the Republic of Austria starting today.

Minister Turkovic will speak at the 64th General Assembly of the International Atomic Energy Agency (IAEA), and will hold a series of meetings with top officials of several United Nations (UN) agencies based in Vienna and the OSCE.

During the multi-day visit, Minister Turkovic will hold several bilateral meetings at the highest level with three ministers from the Government of the Republic of Austria, and arrange a meeting with honorary consuls of Bosnia and Herzegovina in this friendly country.