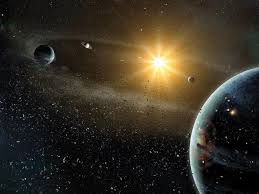 On 17 December 2019 the names of 112 sets of exoplanets and host stars named in the IAU100 NameExoWorlds campaigns were announced at a press conference in Paris (France). Within the framework of the International Astronomical Union’s 100th anniversary commemorations (IAU100) in 2019, 112 countries organised national campaigns that stimulated the direct participation of over 780 000 people worldwide, who proposed and selected names for each exoplanet and its host star.

The IAU100 NameExoWorlds project saw massive and widespread participation around the world, as the public eagerly engaged in this exciting opportunity to suggest meaningful, creative and unique names for exoplanet systems for their respective countries. This is only the second time in history that a campaign has led to the naming of stars and exoplanets. Overall, 360 000 proposals for names were received from 112 countries. The National Committee in each country reduced their proposals to a shortlist of national candidates, which were presented to the public for their votes. A total of 420 000 people voted for their preferred candidates. The complete list of names approved by the IAU100 NameExoWorlds Steering Committee can be explored here. This project will have a lasting impact, as the winning names will be used in parallel with the existing scientific nomenclature, credited to the person, group or institution that suggested them.

After that, a public vote was taken and a total of 2026 people voted and the most voted for was ‘Planet Naron, the star of Boson’.

“Astronomical observations over the past generation have now discovered over 4000 planets orbiting other stars — called exoplanets. The number of discoveries continues to double about every 2½ years, revealing remarkable new planet populations and putting our own Earth and Solar System in perspective. Statistically, most of the stars in the sky are likely to be orbited by their own planets — they are everywhere,” said Eric Mamajek, co-chair of the NameExoWorlds Steering Committee.

“While astronomers catalogue their new discoveries using telephone-number-like designations, there has been growing interest amongst astronomers and the public alike in also assigning proper names, as is done for Solar System bodies,” Mamajek continued.

The IAU100 NameExoWorlds global project was conceived to create awareness of our place in the Universe and to reflect on how the Earth would potentially be perceived by a civilisation on another planet. As the IAU is the authority responsible for assigning official designations and names to celestial bodies, the IAU100 celebrations in 2019 were used as a special occasion to offer every country the chance to name one planetary system, comprising an exoplanet and its host star. IAU100 NameExoWorlds Project Manager, Eduardo Monfardini Penteado said

“The IAU100 NameExoWorlds campaign provided the public with the exciting opportunity to help with the naming of over 100 new worlds and their stars, and to help the IAU establish a thoughtful naming theme for naming future discoveries in those systems.”

Each nation’s designated star for naming is visible from that country, and is sufficiently bright to be observed through small telescopes. The respective National Committees, following the methodology and guidelines set up by the IAU100.

NameExoWorlds Steering Committee, were the bodies responsible for establishing the conditions for public participation, disseminating the project in the country and developing a voting system.

The newly named exoplanets are likely to be large gas giants, and all were discovered via one of two discovery methods: the transit method — where planets are observed to pass in front of their star and block a portion of the star’s light; and the radial velocity method — where careful measurement of a star’s spectrum reveals it to be wobbling back and forth under the influence of the gravity of its planets.

The NameExoWorlds project was organised within the framework of the IAU’s 100th anniversary in 2019. With over 5000 activities in 140 countries, millions of people around the world are celebrating the astronomical breakthroughs that have shaped science, technology and culture throughout the last century, as well as highlighting the importance of astronomy as a tool for education, development and diplomacy. Find more information on the IAU100 website.

“Throughout the year we have engaged with the public through various astronomy activities for the IAU’s 100th anniversary. The NameExoWorlds Global Project has been the perfect initiative to close a year full of projects engaging with society. It will surely have a lasting impact for years to come,” concludes IAU President Ewine van Dishoeck.