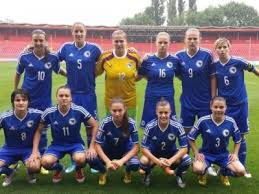 The women’s soccer senior team of Bosnia and Herzegovina won yesterday the selection of the Faroe Islands with result of 2:0 . The match took place in Zenica.

The national women soccer team is on the fourth position in qualifying Group 4 for the next World Cup to be played next year in Canada.

BiH team is left on to play two more meetings: in Sweden on 13th September and four days later as a guest with a representation of Poland.