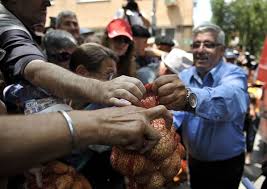 Representatives of the Alliance of Agricultural Associations FB&H, dissatisfied with the attitude of the authorities towards the agriculture, yesterday distributed again their agricultural products to citizens at the parking lot behind the market Markale in Sarajevo

President of  the Alliance, Avdo Muslimovic, said that they haven’t achieved much with the previous action organized two week ago, because representatives of the relevant Ministry and the Ministry of Finance haven’t accepted the dialogue with them.

He pointed out that yesterday was the last time they tried to make contact with the Minister Jelka Milicevic, minister Semsudin Dedic and the Prime Minister Fadil Novalic, in order to reach an agreement about the payment of subsidies from 2014 and the dynamic of the payment for the current year.

Muslimovic said that they only ask the compliance of the Law on agriculture, Law on financial support and the Law on the execution of the budget, by which their problems would be solved.

Otherwise, he emphasized that they will organize themselves and block the work of the Government of FB&H on 20th July.

Representatives of the Alliance tried to present several agricultural products to the minister Milicevic, but it was said to them that she s not in the building of the Ministry of Finance, because the session of the Government of FB&H was in progress.